The Path beyond Expectation

A lot of animal scientists might tell you growing up in farming family gave them backbone as animal scientists; hard work in early morning, many orders to follow, and patience by working outside no matter what weather. At least, most of them have some kinds of farming experience in their childhood and raised interests for agriculture. However, one young man from capital city of Croatia without agricultural back ground has a big ambition for Animal Breeding & Genetics and pursues his PhD in Animal Breeding and Genetics at University of Georgia.

Ivan Pocrnic from Zagreb, Croatia said he had no idea about animal breeding and genetic improvement when he was a student in University of Zagreb. He grew up at Zagreb, the capital city of Croatia, with his parents, Ivica & Ljiljana Pocrnic and his grandparents Mihovil and Ljerka. In his big family house, his grandparents rose chickens and turkeys, but he just played with them and never wondered how his grandpa selected the chicken to keep.

Like many city boys in Zagreb, it was natural for Ivan to attended University of Zagreb after graduating his high 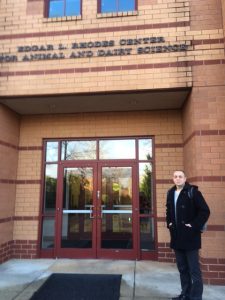 school. He enjoyed college life and majored Agriculture Economic for his Bachelor degree. However, taking introductory Animal Breeding class opened his eyes for genetic evaluation in his junior year. He recalled his first impression for Animal Breeding and Genetics, “I thought it was all about lab work, but they used precise calculations and it all related with Statistics! It was very interesting, so I decided to pursue my Master degree in Animal Breeding.”

During his Master course, he visited a farm for the first time in his life. “Farmers were very hard working. That amazed me very much and gave me motivation to accomplish research to support them.“ In the graduate school, Dr. Alen Dzidic supervised his research and Dr. Ino Curik and Dr. Miroslav Kaps also provided for him generous supports for Ivan to achieve his Master Degree.

Followed by accomplished his Master degree, Ivan worked at Croatian Agricultural Agency (HPA) for one year. His job at the agency included data analysis for dairy cow, beef cow, goats, and sheep. “I was very proud to work there. They just started with Simmental cattle’s genomic evaluations.” As much as he gained experiences as a researcher, genomic selection became more exciting to him and it made him seek an opportunity to return to graduate school for PhD.

Graduate schools in Germany and Austria would be common choices for Croatian graduate students in Animal Breeding and Genetics, but Ivan’s path was leading him to Athens, Georgia, United States. In 2014, Dr. Miroslav Kaps, encouraged him to attend the famous Dr. Ignacy Misztal’s summer course at University of Georgia. “The trip changed my life. I noticed his team was researching many interesting big data. As soon as I returned to Zagreb, I started filling paperworks to join the team as a graduate student. There were only six months to take tests such as GRE, TOEFL, apply for student visa, say goodbye to my friends and family, and engage my Blanka to start life in United States. She found it as a great opportunity for both of us and supported me in many ways.”

Dr. Misztal’s team provided Ivan friendly environment to focus on his research. “In this team, everyone is very helpful and open-minded. Breno really helped me to settle in Athens and we became great friends. Daniela and Yutaka always welcome my questions and share their insights. I am currently working on APY study, the new algorithm to apply in genomic evaluations. It will reduce computing time to analyze big genomic data. I had leaned incredibly much in this group,” he said.

After achieving PhD degree, Ivan hopes to establish his carrier in academic filed for his ultimate goal. “I want a simple

beautiful life. I do not need much. To support animal agriculture in Croatia in future, working in this team to continue more research after graduation; that is all I ask of my carrier.”

Despite of lack of field trainings in the farm, Ivan’s theoretical and practical ideas continue expanding to develop his research for animal breeding. He encourages graduate students with an interest for big data analysis to visit Dr. Misztal’s team. “We are working for future. We are preparing it,” he said.